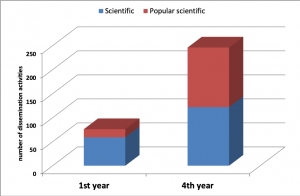 During the action there was also a significant increase in the variety of categories of dissemination activities. If at the beginning the majority of the activities was done in terms of participation at various scientific symposiums (mostly organized by non-members of ActInPak) and by publishing scientific articles in peer reviewed journals, at the end of the Action the variety of activities was significantly higher. There was more participation in non-scientific events organized either by a third party, ActInPak member or in cooperation with ActInPak. Among other events / activities also three training schools were organized.  ActInPak members authored several books or book chapters, a regular newsletter was sent out twice a year by ActInPak. Four informational leaflets dealing with active packaging, intelligent packaging, sustainability of AIP and legislation issues of AIP were prepared and distributed in all member countries, while their short versions were translated into nine languages and are available online. Internet was also widely used for presentation of informative videos in the YouTube channel about AIP, about events and about other activities (e. g. STSMs), while LinkedIn and Facebook accounts were used for information exchange and networking activities about the Action. The main hub for the dissemination was the website (www.actinpak.com) which will still remain active for two years after the Action is finished.  A detailed comparison of various activities in 1stand in 4thyear is presented in Table 1.

As a final step also an online survey has been made where the awareness about active and intelligent packaging has been questioned in terms of participation in various dissemination activities. Even though the majority of respondents were from academia and were familiar with active and intelligent packaging, it was established that also here more than half of respondents participated in popular scientific events. Their participation was mainly active (speaker, poster…) and they participated more than once. The same is true also for other types of communication – also here the emphasis was on popular scientific communication (trade journals, popular journals etc). It can be stated that also this final survey confirmed the change in communication from mostly scientific to more popular in order to increase the general public awareness about active and intelligent packaging.

Stay Up To Date